Crew-center.com is reporting that the Norwegian Epic took out a pier in San Juan.

“The NCL cruise ship Norwegian Epic, crushed into dock in San Juan, Puerto Rico causing structural damage to the pier. After experiencing power loss yesterday, Epic had to cancel ports in Tortola and St. Thomas and arrived today in San Juan with the help of tug boats for repairs. According to Cruceros Puerto Rico Norwegian Epic crashed into pier 3 due to strong winds in the bay of San Juan. There are no reported injuries onboard but the damage to the port facilities will be a costly one.” 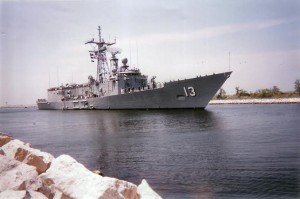 Back in my Navy days, and it happened on Friday the 13th, my ship ran aground at Roosevelt Roads in Puerto Rico.

I was on the bridge (I wasn’t driving!) and we came into port after a successful day of conducting top-secret naval excercises.

I sensed something was wrong when the helmsman tried to throw the engines into reverse and nothing happened.

Next thing you know we made landfall!!!

Remember that scene from Speed 2 when that cruise ship rammed into the pier (and the town!) Well, it wasn’t like that, but we basically beached the ship! We had to wait for high tide and then tugs rescued us from a bad day!

We had another accident with the Morison when we were coming into the basin in Mayport, Florida.

Again, the engines failed and we hit the U.S.S Vreeland!

Our bow rammed into the quarterdeck of the Vreeland, hence the phrase, “The Morison put the “V” in Vreeland!!!”

Anyway, I’m glad no one was hurt during the Norwegian Epic accident. The next time you miss a port of call due to high winds, don’t be mad, remember this post!

Click on the link below for the full story.

Will the cruise lines recover

This site uses Akismet to reduce spam. Learn how your comment data is processed.

Powered by WordPress | Designed by 49S
© Copyright 2020, All Rights Reserved